FAQ: What to Do if Wrongfully Accused of a Crime 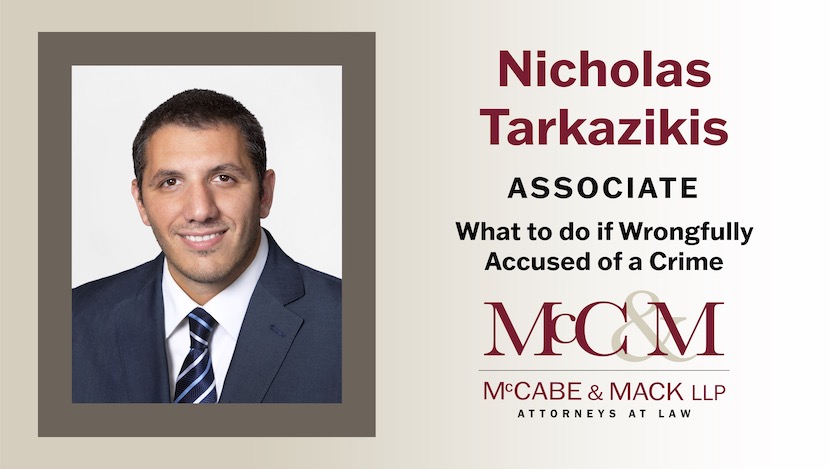 Our attorneys at McCabe and Mack LLP were recently discussing how crime drama is a genre that seems to be growing exponentially in popularity, both on TV and the big screen. These shows and movies are fascinating to watch and remind everyone of the importance of seeking justice for innocent victims.

Once in a while, the “victim” is someone who has been wrongfully accused of a crime.

We all know that this situation can unfortunately play out in real life as well, and that it might be helpful to have a basic understanding of what to expect should that ever happen to you or someone you love.

Before joining our team of lawyers at McCabe and Mack LLP, Associate Nicholas Tarkazikis was an Assistant District Attorney for the Bronx County District Attorney’s Office. His extensive experience working on criminal cases taught him that although rare, there are certainly times when someone is wrongly accused of a crime.

He offers some advice:

Q. What is the most important thing you can do if you are being accused of a crime you didn’t commit?

A. Do not say anything, except to ask for a lawyer. You have the right to hire legal counsel, and that is the only statement you should make if an officer is arresting you. Once you have requested an attorney, the police cannot ask you any further questions. This is a good thing because it prevents you from saying something that could be perceived as incriminating in some way (even if it is not). Sometimes people will get tricked into making statements that will end up making it impossible for them to prove their innocence. Silence is critical; just ask for a lawyer and then exercise your right to remain silent.  If you cannot afford a lawyer, one can be appointed for you.

Q. How do you proceed from here?

A. Continue to stay quiet on the matter and let your lawyer handle everything on your behalf. The attorney will gather evidence to support your case. In this era of technology, there are video cameras in most public places and a great deal of information can also be gathered from cell phone records, so those things work to your advantage if you have been accused of a crime that you did not commit. The District Attorney will look at all evidence and dismiss charges if your involvement cannot be proven beyond a reasonable doubt.

Q. What specialty should my attorney have? And what if I cannot afford a lawyer?

A. If you are accused of a crime, you will need a criminal defense attorney, especially if you are going to trial. If you cannot afford to hire someone privately, you will be assigned a public defender from the New York State Legal Aid Society. They have offices all over the state, and having worked as an Assistant District Attorney, I can say that the public defenders have very strong relationships with the DA offices, and tend to get favorable deals. Public defenders are on duty for all arraignments in the event that someone does not have a private attorney. They will handle the arraignment and then if you want to hire a private attorney at a later date, you can.

Q. How does one go about gathering evidence?

A. Attorneys use private investigators and other resources to gather video footage and other evidence. They have just as much capability as the police do to obtain evidence, and they are completely focused on collecting everything available to support the case; they tend to know exactly what to look for and where to find it.

Q. What is an alibi and how do I prove it?

A. An alibi is basically an explanation as to why you could not have been the person who committed the crime. Let’s say the crime took place in Poughkeepsie and you were at your girlfriend’s house in Fishkill. In that case, she can testify that you were in Fishkill at the time the crime was committed. You can use the alibi and witness testimony, along with other evidence, to prove your innocence.

Q. Should I expect to be in jail while the case is being investigated?

A. Because of the New York State bail reform, you will most likely be released. Very few people sit in jail. Unless you are being accused of a very serious offense, you are probably not going to be in jail – at least not until you are found guilty and are sentenced to jail.

Q. What are my chances of clearing my name if I have been accused of a crime that I didn’t commit?

Reach out to Nicholas Tarkazikis directly by calling his office at McCabe and Mack LLP in Poughkeepsie, NY: 845-486-6884.