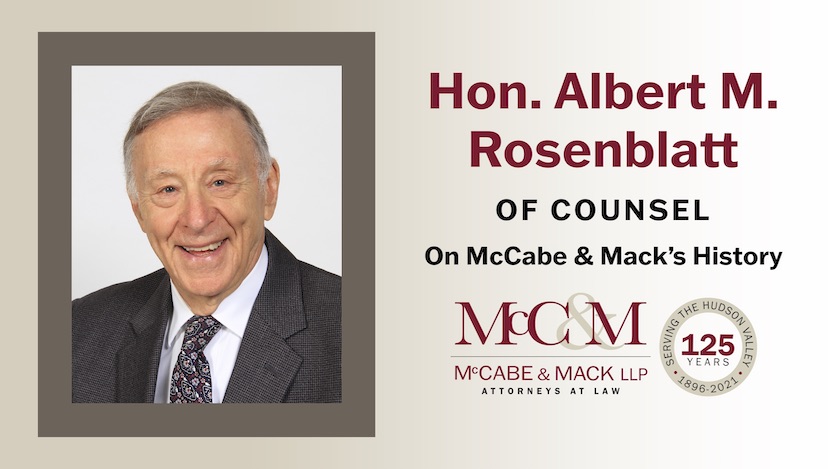 As part of our 125th anniversary celebration at McCabe and Mack LLP, we thought it would be great to showcase the extraordinary career history of the Honorable Albert M. Rosenblatt, Of Counsel at the firm. After all, he’s raised the bar for all of us, having served on the highest court of New York State. With a career that has spanned several decades right here in Poughkeepsie, he had some great tidbits and insights to share:

Q. How did you land at McCabe and Mack?

A. For 34 years, my career was in the judiciary. Before that, I was Assistant District Attorney, starting in 1964, then became DA (1970-1976). I didn’t know Richard McCabe Sr., –it was said of him that each night he would read a chapter of Corpus Juris, the legal encyclopedia–but I knew his son Joe McCabe, a great lawyer, and I’d sometimes sit and have a cup of coffee at Alex’s Restaurant with him, right across the street from the courthouse.

We’d sit at the counter when I was Assistant DA and then DA. He often suggested that I enter the private practice law at some point. In all, I’ve been through five elections (two for DA, one for County Judge, and two for Supreme Court), and the night before each I would call my good friend Joe McGowan and say –“ Joe, the election may look ok, but if I lose, I will be knocking on your firm’s door, tomorrow.” So when I retired from the bench in 2007 and in addition to teaching law at NYU Law School, it made sense for me to be with a firm where I already had local friends whom I knew would make wonderful colleagues – which turned out to be so.

Q. What has it been like to see the firm expand and grow over the years since?

A. The firm has been transformed over recent decades; and has kept up with the times and cultural changes. When you think about its make- up in earlier times, with just a small group of white-haired, distinguished men with impressive resumes – and where we are today, with a much larger group of people from all walks of life and backgrounds, who likewise have impressive resumes – but with the added feature of gender equality.

Q. Tell us what it was like to serve as part of the New York State Court of Appeals.

A. That’s an experience that I will always keep with me — a part of my life that I truly treasure. It enabled me to work side-by-side with other judges whom I not only admired, but whose presence I always enjoyed immensely. I still have great affection for them and remain in contact with several. Some are still on the Court and others like myself left, due to age requirements under the State Constitution.

On the court, almost nothing by way of decisional product was done by one person. Most everything followed discussion, debate, and, usually, consensus. Judges at that level of the Appeals Court do not act on their own, but rather by majority. I learned a lot and like to think that I contributed as well, but the learning curve never ended. We interacted well with one another and I think the writings from the Court reflected a fine group of minds working together collegially. What one judge might have missed or overlooked could be picked up by another. It is hard to have anything important slip by unseen, given that many sets of eyes – and those of my wonderful law clerks.

Q. What was the biggest takeaway of that chapter of your journey?

A. Well, fashioning the law is not easy under any circumstance, but when you’re able to do it with a thoughtful group of people and work together to hammer out what will eventually become state law, it’s just an incomparable experience. You learn so much about listening, communicating, and collaborating. We conferenced each case in a round table discussion, gaining insights from one another—and it helped distill the issues and the outcome.

Q. Tell me about some of the most exciting cases.

In addition to that, the cases that involved the Long Arm Jurisdiction Statute were always interesting, where we had to determine whether to exercise jurisdiction over out of state parties.

Reviewing the Penal Law homicide hierarchy was a challenging experience, and then, of course, there were all the day-to-day cases that affect people’s liberties and pocketbooks – and exploring how to deal with those cases in the context of the rule of law. We strived of course for quality, but others will have to be the judge of that. I can say that we achieved a good level of clarity in the writings, and were also able to reach consensus. Most of us were consensus driven, particularly our revered Chief Judge, Judith Kaye.

Q. I understand that clients from as far away as Australia have hired you to help them understand New York State law. What has it been like to share legal expertise with people from all over the world?

A. Yes, when the United States does business abroad in Europe, Asia, or anywhere in the world, the parties are able to enter into contracts, and sometimes agree that New York laws should govern in any dispute. This is affirming for all of us, to know that the parties regard New York law as stable and responsible, and a source of jurisprudence that can be invoked in contracts from all over the world.

When parties have contracted to apply New York law, they will often look to former New York judges to present expert opinion on a pertinent point of New York law. So, I’ve had cases in Australia, France, England, and other countries, mostly involving how New York law would interpret various phrases and provisions in a contract. It is exhilarating to work with people from all over the globe.

Q. In your opinion, what has made McCabe and Mack such a pillar of the community for 125 years?

Q. What was one of your most memorable career moments?

A. Being nominated by Governor George Pataki to serve on the Court of Appeals was quite memorable. I’ll never forget what it felt like to be sworn in and serve on the court on which Judith Kaye, one of the most illustrious figures in legal history, served. She was the Chief Judge of the New York Court of Appeals – and I got to have breakfast with her almost every day in Albany and work with her directly, which was an honor. On my first day on the court, she took me on a tour of the courthouse, which included a glimpse behind the bench, where at the feet of the judges were brass spittoons—a remaining relic. She was fond of saying that she would some day give them more daylight and fill them with begonias.

In another moment, she and I looked around the courtroom of the New York Court of Appeals and appreciated that the oil paintings on the wall represented many eminent Judges, some of whom went back to the 18th century, and some of whom we did not even recognize. We’d be on the bench doing our day job, but when we’d look around and see paintings of these folks, we felt we wanted to find out more about them. So we made lists of who they were and tried to research their backgrounds. In early 2003 or so we were able to complete research on 100 of the judges who’d served on the NY Court of Appeals since 1846.

We found progeny for maybe 80 of them and invited their descendants to one gala event in the courtroom. There were dozens of people and we showed them paintings of their ancestors and told them what we had learned; they likewise shared what they knew about their family members. It was poignant, emotional, and great fun.

A particularly joyful connection with was John Jay’s family. In 1777, he became the first Chief Justice in New York State. His painting is where it belongs, front and center. And his grandson John Jay II was one of the principal lawyers who won the release of the Lemmon slaves, a case that came from the New York Court of Appeals.

Also on the wall is James Kent, considered the “father of American law” – and a great many others who have made a tremendous impact on all of our lives through their work. It’s really incredible and inspires awe to sit in that room and be in their “company” through these paintings. You realize you’re part of this procession and you have the feeling that they are in the courtroom as part of the legacy. Judge Kaye loved history, as I did, and it all led to our forming the Historical Society of the New York Courts.

A. I’m sometimes asked by young people what steps they should take for their first job or for a career move, or the like. I’ve come around to what I think is one way of looking at it, although maybe not the conventional one.

Young lawyers starting out might imagining themselves at the end of their careers, and ask themselves: “What do I want to have accomplished? What do I want to have learned, gained, and done?” In other words, look at the reverse end of the telescope – if you know how you want to feel or be at the end, you might be better informed on what first steps to take at the beginning of the journey. Look at each step of a career as something you really want to do and can excel at—as opposed to taking a step solely because of where you think it might lead.

Things don’t always work out as planned, because there are so many other factors, like luck and happenstance, but it can be a useful guide for identifying and examining what you regard as the good life as a lawyer.

We are grateful to have the great privilege of knowing and working with the Hon. Albert M. Rosenblatt. Learn more about his history with McCabe and Mack LLP and in our area by visiting https://mccm.com/hon-albert-m-rosenblatt/.