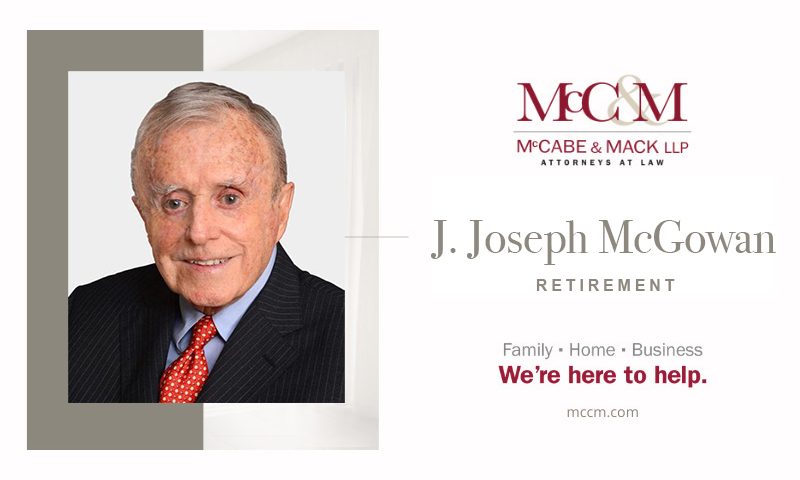 Said McGowan, “It’s been a wonderful privilege to provide legal services to businesses and individuals throughout the region for so many years; it’s great work and I’ve truly enjoyed it. I was the first full-time associate of the firm when it was still McCabe and McCabe in the early 1960s, and have since watched the organization grow, evolve, and expand its impact in many ways. We have a highly talented team at McCabe and Mack, and I am confident that they’ll do great work for generations to come.”

In addition to McGowan’s role as a longtime local attorney, he also became well-known for his commitment to community service over the years. Volunteer roles have included those with organizations such as Astor Services for Children and Families (where McGowan was Trustee from 1989-2018, Trustee Emeritus 2018-present, and Board President 1992-2004), Mount Saint Mary College (Trustee 1980-1989), Community Foundations of the Hudson Valley (Board Member 2000-2011, Secretary 2006-2011), Mid-Hudson Civic Center (Board President 1984-1985), as well as service to Abilities First and the City of Poughkeepsie Planning board.

McGowan reflected on advice he might offer to young lawyers: “It’s important to find a place like McCabe and Mack where the philosophy is ‘come work WITH us’ – not ‘come work FOR us.’ We’ve always looked to hire people who want to be part of a team – and who aspire to one day become partners – lawyers who really want to build a career with us and become a valued member of the local community. I think that is what ends up making their professional experiences more fulfilling, and ultimately what makes lawyers more successful as they work to meet the needs of their clients and communities.”

McGowan and wife Mary, a retired certified public accountant, plan to maintain residence in their City of Poughkeepsie home. They have two adult daughters, Ann and Sarah, and one granddaughter.