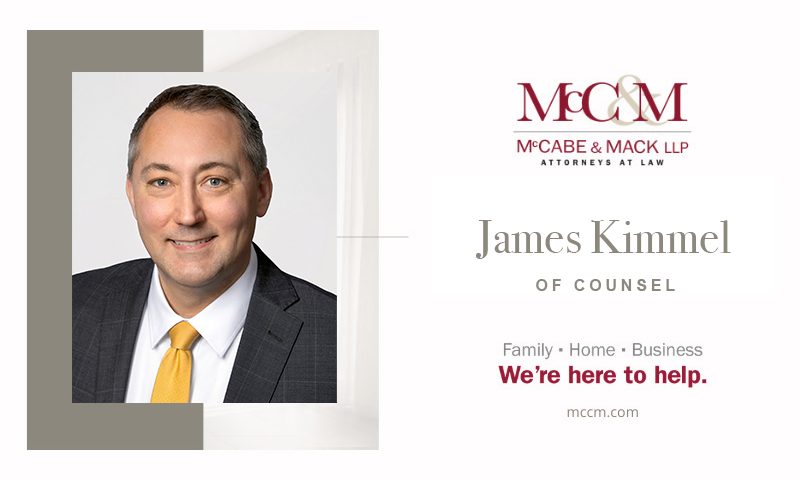 James Kimmel, Of Counsel at McCabe and Mack LLP, might share a name with “Jimmy Kimmel” of late-night comedy fame, but this equally-affable attorney has a story of his own.

“Naturally, the Jimmy Kimmel connection works as an ice breaker – who doesn’t love a great comedian? I am definitely NOT opposed to anyone making that association – there are certainly worse people with whom to share a moniker!”

And for James, other “positive parallels” have revealed themselves recently as he reflects on his journey. Born and raised in Ohio, James grew up in what he called a “classic medium-town atmosphere”. Although he made a few other ‘stops’ along the way, he is grateful to have landed in the Mid-Hudson Valley, which shares a cultural identity with his rust belt roots in northeast Ohio. “It is certainly more scenic here than where I grew up, but there are parallels: a sense of shared purpose and spirit of community.”

“After completing my BA in 1995 at The Ohio State University, I wanted to experience life in the big city – which is probably not unusual for someone who grew up in the suburbs. You think you want and need something big. So I made my way to New York Law School, which is where I earned my Juris Doctorate degree in 2002.”

Although he was very enthusiastic about a chance to experience city life, James noted that it was not without some darkness – which happened fairly soon after his arrival to the Big Apple.

“As a law school student, I took a part-time job at a firm on Wall Street in New York. On the morning of September 11, 2001, I got off the subway and looked up to a sky that was totally black. I knew something was terribly wrong, and although I was only a few blocks from the World Trade Center, I was not able to see what was happening. I got to my office, looked out the windows, and – along with other colleagues starting their day- we learned that the second plane had struck the World Trade Center. I didn’t see it hit, but it home that our country was under attack.”

Although he describes that year as a “very tough” one, brighter days came along – as they do for all of us in life. “Not long after graduating from law school, I took a role in a private practice, where I stayed for 16 years. I learned a great deal, and during that time I got married, became a dad, and divorced in short order. It’s not easy to meet the demands of life as an attorney as a single parent, but I made it work.”

During the pandemic, James explained, “life changed so dramatically. I realized that I was ready to get out of the city. It was fun to live there, as a young professional, but as you get older you begin to seek more meaningful experiences that come from being part of a more cohesive community. My son’s mother was in the Hudson Valley so I knew that was the place.”

Now a resident of Beacon, James says that he feels he has come “full circle” in a sense, reconnecting to the experiences of his adolescence.

“If you turn on the Hallmark channel, there are many movies about people returning to their hometowns as adults – so I realize it sounds a little cliché as I compare Youngstown, Ohio to Dutchess County. But the truth is, when you grow up feeling like you can really connect with a community, you always crave that. And I think you feel better and healthier when you live in a place that allows for such connection.”

James added that his sense of community now extends to his professional life as well. “I wanted to find a firm that felt like ‘home’, where I can stay for the long run. McCabe and Mack LLP offers the best of everything – it is a sophisticated, top-notch firm, but values relationships and creates a sense of purpose for all of us who work here. Everyone is encouraged to get involved and give back; I have already reached out to area high schools to see if I can support any kind of speech and debate team similar to what I enjoyed as a younger person.”

“At McCabe and Mack LLP, I know I can make meaningful contributions for our clients and the wider community. I am really looking forward to this part of my story.”