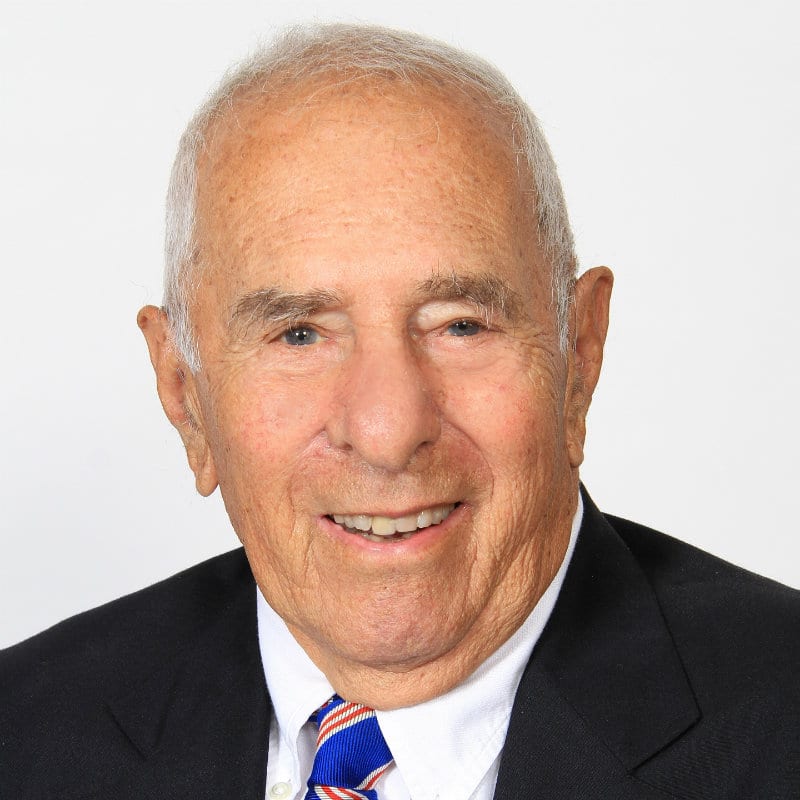 The partners, associates and staff at McCabe & Mack LLP sadly announce the passing of our esteemed friend and colleague, Phillip Shatz. He was a fierce advocate and trusted advisor to countless clients. Phil was partner, senior partner and counsel from 1982 until his retirement in 2018 at the age of 92. We will miss his vigor, wisdom and counsel.

The article below was written from an interview shortly before his retirement. His obituary, published in the Poughkeepsie Journal, can be found here.

Phillip Shatz, an esteemed colleague, friend and longtime McCabe & Mack LLP partner and counsel, will retire from the practice of law on September 1, 2018 – his 92nd birthday.

Here, Phillip Shatz reflects on his life and long career as a businessman and attorney in the Hudson Valley.

Q. You graduated from Syracuse University in 1948 and then later went to Columbia Law School, graduating in 1954. How did you come to work at McCabe & Mack LLP?

A. I was born in Carmel, New York, and grew up on my dad’s farm. After I got out of college, I went into the insurance business. It was interesting work, and I was successful, but the industry was changing – very large companies were taking over smaller businesses, brokers were overpaid, and profits were falling. I didn’t enjoy the selling aspect of insurance as much, so I decided to go to law school at Columbia, and there I fell in love with the practice of law. I knew that was what I was called to do.

I was lucky enough to clerk for Judge John P. Donoghue, who, incidentally, married one of the Mack daughters. He gave me the best advice I ever got – he said, “Never go to the city. Stay in the country – it’s a better life.” And he was right. Donoghue argued that if you live in the country, you don’t need to have a country home. It’s more stable, more fun, you need less, and it’s just a better way to live. And I agree!

After working for John Donoghue, I partnered with Bill Braatz, who became the Surrogate Judge of Putnam County. I then formed Shatz Thompsen & Mace with Howard Thompsen (who later became the District Attorney of Putnam County). For about 10 years when I was with Shatz Thompsen & Mace, I was also President of Putnam County Federal Savings and Loan. My partner Howard Thompsen said to me, “Decide — be a banker or be a lawyer but not both.” I chose to be a lawyer. John Howley, who was first in his class of Princeton and Harvard Law and the most brilliant lawyer I’ve ever known, retired from his firm, and he and I merged with McCabe & Mack in 1982.

Q. What areas of law have you practiced in your career, and what have you found most fulfilling?

A. I have been a general practitioner mostly on the commercial side with banking and general litigation. I worked with several banks. First National Bank of Highland became a client, then I became their general counsel. I was also general counsel to Pawling Savings Bank. We worked with Poughkeepsie Savings Bank and the First National Bank of Rhinebeck.

The fun of practicing law is that it has been a quality practice – and it has given me the opportunity to work with decent people and growing businesses who want to do the right thing. It has been a good way to spend my life.

Q. In addition to your insurance, law and banking work, you’ve been involved in several other successful business ventures. Tell us about some of those.

A. Well, in the 1960s, a few partners and I built the Beekman Country Club. We had 600 acres, so we designed and built an 18-hole golf course, then expanded to 27 holes and added a 300-house subdivision. It has been worth a fortune in joy and a great opportunity for business. We ran it for 56 years. It was a wonderful way to meet people and spend time.

I was also a Director of a company called Hipotronics, Inc., a manufacturer of a product that could detect defects in high voltage power lines, started by engineer Stanley Peschel in his basement in the 1960s. It grew so rapidly that it was on the American Stock Exchange in just four years. I spent three years full time with that business.

I also was President of the local Red Cross, a scoutmaster and a founder of the Putnam hospital. However, I am most proud of helping my alma mater, Syracuse University acquire Drumlins Country Club, a 1000-acre property with golf course. I also was President and a Trustee of Syracuse’s research corporation.

My wife Natalie and I started the maple syrup business on our property to get our kids involved in getting up early to collect sap and make syrup. Then we built a bigger system. Now we’ve got about 150 trees, which yield 1000 gallons of sap for about 100 gallons of syrup. We would have 80-90 friends over to the house for a maple syrup party and everyone participated. It was the same with the apple orchard – we pruned the orchard, ate the apples and made cider on an antique cider press. We also have a trout pond – I always wanted one, to experience the joy of being able to catch and release and fly catch with buddies.

Q. You’ve had such a full career and life, what’s next for you in retirement?

A. In retirement – I don’t know exactly what’s next, but I’m going to be 92 on September 1. I’ve been admitted to Vassar College and will become student of sociology. Ninety-two is a good age to start college!

We have four kids – all good bright kids, who are fun to be with and watch grow. We have six grandchildren and two great-grandchildren – a wonderful family. Every year all 18 of us get together for a family trip. We’ve been on safari in Africa, to Greece, Ireland, Jamaica, Costa Rica – wherever we decide to go. On odd years, all 55 of my parents’ descendants get together. First it was at the farm, but now we go to the North Carolina shore.

My biggest source of pride is having been part of a group that built a small law firm into a pretty good-sized law firm that continues to have the reputation, the ability and the quality of lawyers to produce creative and ingenious law. I’ve watched the firm grow over the years, and I’ve observed the success of the partners who are leading it now. It’s been spectacular to be part of it.

I guess you could say I was a farmer who was lucky enough to practice law for a living.

Phillip Shatz and his wife, Natalie Marshall, a lawyer and professor emeritus of economics and retired vice president for administrative and student services at Vassar College, have four grown children scattered from London, England to Thailand. Phil is a golfer as well as an avid farmer.

In Case of Fire, Stay Cool