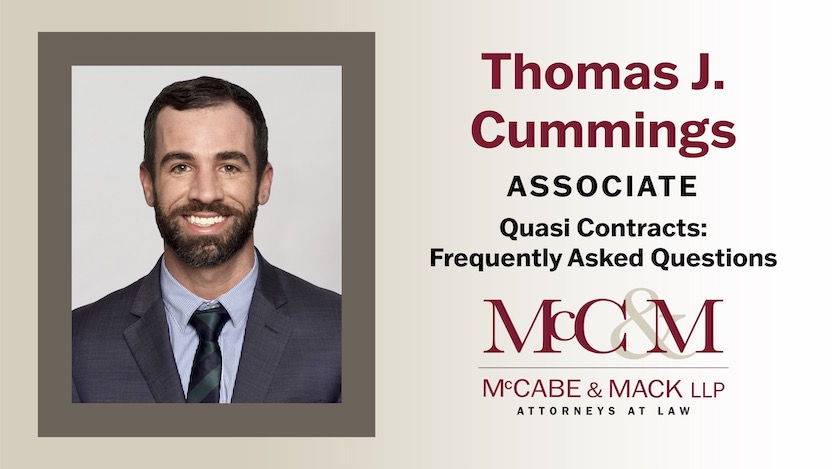 Over his years of providing legal counsel to clients throughout the Hudson Valley and beyond, Tom has often worked with people and businesses on “quasi contract” situations. We asked him to share responses to some of his most frequently asked questions on that particular topic; read on to learn more:

Tom, what exactly is a “quasi contract”?

A quasi contract arises when parties to a transaction have engaged in conduct that, although insufficient to form an enforceable agreement, would make it inequitable to allow one of the parties to retain a benefit or fail to compensate the other for that benefit.

What criteria need to be met?

The criteria that need to be satisfied vary depending on the type of claim, but the plaintiff generally has to show that it provided something of value to the defendant (e.g., money, goods, or services) and that it would be unfair if the defendant were not obligated to provide something in return.

Can you give me a brief overview of the various types of quasi contracts?

“Unjust enrichment” and “quantum meruit” are two of the most prevalent claims based on quasi contracts, and it’s common practice to assert these claims as alternatives to a breach of contract claim if there are potential issues concerning the existence or enforceability of an underlying agreement.

Unjust enrichment often involves a preexisting relationship of trust between the parties or inequitable conduct on the part of the benefitting party. Unlike quantum meruit, unjust enrichment isn’t limited to services and, in addition the elements above, requires the party asserting the claim to demonstrate a sufficient relationship between the parties such that the party asserting the claim was induced to provide the benefit or provided the benefit believing the other party would do something in exchange.

What is an example of a situation where a quasi contract was put into place?

What is the difference between “implied in law” and “implied by fact”?

When these quasi contract situations arise, how long does the process take to get resolution?

It depends on the case, but it can be more difficult and time-consuming to prove a claim based on a quasi-contract because there are no explicit contract terms. For example, if a contractor and a homeowner entered into a contract with a price for services, it’s easier for the contractor to prove the amount due on his claim because the value of the services is dictated by the written agreement. If the contractor seeks to recover on a quantum meruit claim, for example, the contractor needs to prove the “reasonable value” of the services that were performed.

What else do your clients need to know?

Equitable remedies are a fallback option, and a party should not assume that they will be available in lieu of entering into a written agreement. Even when dealing with people you believe you can trust, it’s always safer to memorialize the understanding in writing.